The Electric Reliability Council of Texas (ERCOT) oversees the the electric grid and manages the deregulated energy market that operates in Texas, and serves some 24 million people.

What is ERCOT and What Does it Do?

ERCOT is one of ten Independent System Operators (ISOs) - sometimes referred to as Regional Transmission Organizations, or RTOs - in the United States that exist to operate a region's electricity grid, to provide reliability planning, and to facilitate the region's wholesale electricity markets. ERCOT was created in 1970 as a non-profit corporation, became the central coordinator for the Texas electricity market in 1981, and became the first ISO in the United States in 1996.

ERCOT's primary responsibility is to match generation supply with demand. Most electricity is purchased under long term contracts, but because demand fluctuates every day - and because electricity is an immediate good that has to be there the instant you flick a switch or turn on a computer - ERCOT also needs to match buyers and sellers together at a moment's notice.

Since power flows can't be directed individually, an electricity grid also has a big coordination problem. If too many generators produce power, some parts of the grid could become overloaded. However, if not enough producers are generating, then consumers will experience power outages. ERCOT intervenes on the market to direct some producers to either decrease or increase output, according to need.

To do this, ERCOT must forecast electricity demand, and ensure that there is enough capacity on-line in order to meet demand spikes. ERCOT is then responsible for managing the transmission of this electricity throughout the state, directing flows of electricity the way that air traffic controllers direct airplanes. In a wholesale market like ERCOT, this is done using the market price.

Example On a particularly hot day, Houston might need more electricity because more people are running air conditioners. ERCOT tries to choose the lowest cost producer from whom to direct more energy to Houston, though in the case of a downed transmission line, it might choose a higher cost producer in order to use the best transmission route.

What is a Wholesale Electricity Market?

The United States is divided into different wholesale markets, as seen below. Texas is unique in that it lacks connections to the rest of the nation's power grid, making it the only state to have its own power grid and independent system operator. 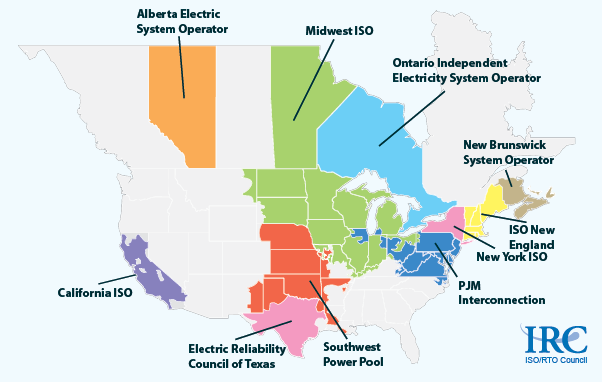 Did You Know? Why Texas Has its Own Power Grid

There are only three Interconnections in the US: the Eastern Interconnection, the Western Interconnecton, and the Texas Interconnection. Why is Texas the only state to have its own power grid? The answer lies in both the history of the evolution of electric utilities in the US and in a particularly Texan resistance to federal regulations. Electric utilities developed gradually in the 19th and early 20th centuries first as small generation facilities that brought electric light to cities. They began to link together and provide long distance transmission over the first half of the 20th century. In 1935, President Roosevelt signed the Federal Power Act, which charged the Federal Power Commission with overseeing interstate electricity sales. Unwilling to submit to federal regulations, Texas utilities formed their own grid, called the Texas Interconnected System (ERCOT's predecessor). This was possible because of Texas's resource wealth: with abundant coal and gas, Texas doesn't need to purchase power from other states.

Traditionally, ERCOT consisted of four regional zones within the general market. However, in 2003 ERCOT began building a "nodal project," consisting of 8,200 pricing nodes -- the exchange points on the grid at which electricity is put in by suppliers and then taken off by electricity retailers. The purpose behind this is to allow ERCOT to more easily localize prices in order to identify lower and higher cost producers when it intervenes on the market.

Rather than 4 different zonal prices produced every 15 minutes, ERCOT's nodal market offers thousands of prices updated every five minutes. The goal of a nodal market is to increase efficiency. With better pricing, more efficient, lower cost power plants will be more competitive in the spot market. The nodal project also created a "day-ahead" market, allowing buyers and sellers to plan for daily fluctuations in advance, and more efficiently coordinate use of the grid.

Did you know? A spot market is a market where goods are traded for immediate delivery, rather than at a future date

The creation of a market with such highly localized data required incredibly complicated computer modeling, and additional staff, and turned out to be far more expensive than originally planned. Originally planned to cost $95 million, costs eventually increased to over $650 million, though the Texas Public Utility Commission expects the nodal market to deliver $5.6 billion in consumer benefits during its first decade.

So, was a nodal market worth the expense? An article from the Journal of Regulatory Economics studied ERCOT before and after  the implementation of the nodal market, and concluded that the shift caused a slight downward pressure on prices - about two percent.

However, though this number seems small, lowering prices was only half of the goal of ERCOT and PUC - they also wanted to ensure future investment into the energy sector, which is done not necessarily through higher prices, but through higher profits. Efficiency gains suggest that generators are operating at lower cost, some of which has been passed along to consumers, and some of which might spur continued and needed investment into Texas's energy sector.