Fixed or Variable Rates: Which is right for you? 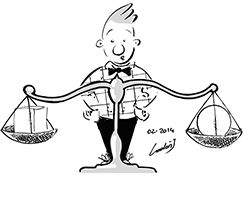 Fixed or variable electricity rates: which price is right for you?

Interested in switching suppliers? Want to get the best deal for your energy but aren't sure which type of price is best for you? Look no further. Here we explain the differences between fixed and variable prices, break down the pros and cons of each type of price, and give you our recommendation of which price to choose.

Best for: customers who are able to handle fluctuations in their bills

Some say that over the long run you pay less on a variable rate, but keep in mind the big risk of price volatility. As you never know by how much your electricity rate will change each month, it can be difficult to budget your energy bills when on a variable rate.

But wait, why did we say that variable prices "usually" change based on market prices? Well, to some extent it depends on who your supplier is. If you purchase energy from your your local utility, the rate you pay will also take into account their administration fees and overhead costs, which also may change from month to month (depending on how it is regulated). High utility overhead may also mean that even if the price you pay changes based on the market price, it still may not be the cheapest rate out there.

Also, some alternate suppliers reserve the right to change variable rates at their own discretion. This can actually sometimes be good for the customer - for example, if prices jump considerably, the supplier may decide not to increase their rates by the same amount of the energy price increase, in order to keep their customers loyal. However, we've also noticed a pattern of negative reviews coming mostly from customers on variable rates, who often find nasty surprises on their monthly bills.

Our Advice If you are looking for a market-based variable rate, look out for indexed rates. These are variable rates that change based on a mathematical formula that is pegged to an energy index.

Best for: customers who want to take control of their energy prices

A fixed rate, on the other hand, protects you from market price fluctuations and locks in a price for your electricity or natural gas for a certain period of time. This type of rate is only offered by alternate suppliers. Depending on where you live, suppliers in your area may offer fixed rate contracts for as short a time period as three months, but most suppliers offer contracts for six, 12, or 24-month time periods.

There are a couple of main advantages of choosing fixed rates:

However, fixed prices can sometimes be slightly more expensive than variable prices, which might reduce the amount by which you will save. Also, keep in mind that you are also not guaranteed the same rate when your term ends and it is time to renew, so choosing a fixed rate may only delay inevitable energy price increases, as opposed to being able to avoid them altogether. Finally, watch out for termination fees, which your alternate supplier may charge you if you change your mind and leave your contract early.

Still not sure? Check out our summary of the differences between fixed and variable rates to determine which type of price is right for you