Included among all the players involved in the Texan energy market are different types of Transmission & Distribution Utility companies (TDUs) in Texas. Some benefit from the energy market deregulation laws, others do not. Here we give information on the different types of utility companies in Texas, the areas they service, how to contact them, and more.

For Texas residents, living in an area where energy is deregulated, it is crucial to understand the companies involved in producing, sending, and managing their power. The Electrical Reliability Council Of Texas (ERCOT) grid, which covers 75% of Texan territory and 85% of the electrical load in Texas, is entirely deregulated.

TDUs are specifically responsible for:

There are three types of TDU / TDSP / utility companies operating in Texas:

While all three types of utilities perform many of the same functions, they are not registered under the same legal entity and are not regulated by the exact same laws.

To report a power outage : Which company do I contact? If your power is out and need to know who to contact (or to check the status of an outage) find all the information needed to Report a Power Outage!

There are five major investor-owned TDUs that have over 550 electrical power stations at their disposal to plug into the ERCOT grid. These utility companies operate in their own defined service regions and are open to retail competition.

The utility service area map shows the areas of Texas covered by: 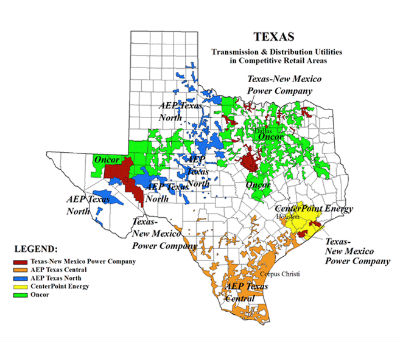 Choosing a utility company in Texas

Texans can only "choose" a TDU company by where they choose to live. A TDU is determined based on the service area of the home's address. You generally won't decide where to live based on which utility company owns the region, but it can be a deciding factor when you consider cost of living.

Price differences between TDUs One thing to keep in mind is that cheaper delivery charges and energy rates does not always mean better, especially when it comes to service stability and speedy repairs. TDU tariffs are a substantial part of the total utility bill.

Price comparison between utility companies in Texas If a lower electricity bill is a top priority for your next home in Texas, refer to the chart below that shows the current TDU montlhy delivery charge and energy rates (ordered from lowest to highest ¢/kWh):

Choose an electric provider in Texas (and really choose!)

Living in a region where Oncor Electric Delivery, AEP Texas (North and Central), CenterPoint, or Texas-New Mexico Power (TNMP) is the designated utility company has its benefit: the right to choose a retail electric provider (REP). This means Texans residing in one of these five service areas have their choice of REP!

Customer Service : Which Retail Electric Providers have the best and worst records in Texas? The Public Utilities Commission of Texas manages one of the best resources to see how providers (REPs) manage and provide service to their customers. The PUC of Texas provides statistics on formal complaints filed against each REP. So, before committing to a plan that seems too good to be true, check out the PUC Customer Complaint Statistics report to see how an electricity provider fares with customers.

There are an abundance of retail electric providers to choose from in Texas. Below are the REPs with the biggest market share in the state that work with all five of the utility companies operating in the competitive electric retail regions:

*TXU - Texas Utilities Company - is not a Transmission & Distribution Utility (TDU) company (as it is commonly perceived) - TXU Energy operates as a retail electric provider (REP).

Customers within the service area of utility cooperatives and/or municipal utilities generally do not have a choice of electricity provider, as both the delivery and the supply of energy are organized by the utility.

Municipal utilities are owned and operated by the cities they serve. They are not directly owned by the area's residents but by the resident-elected council members. Most municipal utilities (although not all) are not subject to deregulation laws, therefore consumers in these areas usually cannot choose their preferred retail energy provider (REP).

Just to give an idea of how municipal and city utilities operate and serve residents, below are a few well-known municipal utilities that Texas has to offer.

A utility cooperative is a not-for-profit company owned by its customers. Co-ops are not included in the energy deregulation laws since they are already considered to be a democratic system of power and gas supply. This system tends to exist in rural areas with low population density - in bigger cities, where population density is greater, the complexity of the system would be difficult to handle by this type of structure.

Find the contact information for your municipal utility or utility cooperative below: