Energy Deregulation 101: Why it happened, what it seeks to achieve

In the past, utilities were responsible for generating, delivering, and selling electricity to all of the customers within their service territory. In most urban areas, they operated as regulated, "vertically-integrated monopolies". Because the costs to build energy infrastructure were so high, economies of scale meant that a regulated, monopolistic system for energy distribution was most appropriate when electricity and gas networks first developed.

Starting in the 1990s, many states in the US started to restructure their electricity and natural gas markets, in order to allow for more competition. What has happened in most states is the introduction of competition in certain stages of the energy service process.

To better understand energy market deregulation, it might be helpful to go through the different stages of the process of bringing energy to your home. The service process for both electricity and gas are quite similar, and can be broken down into four main steps: 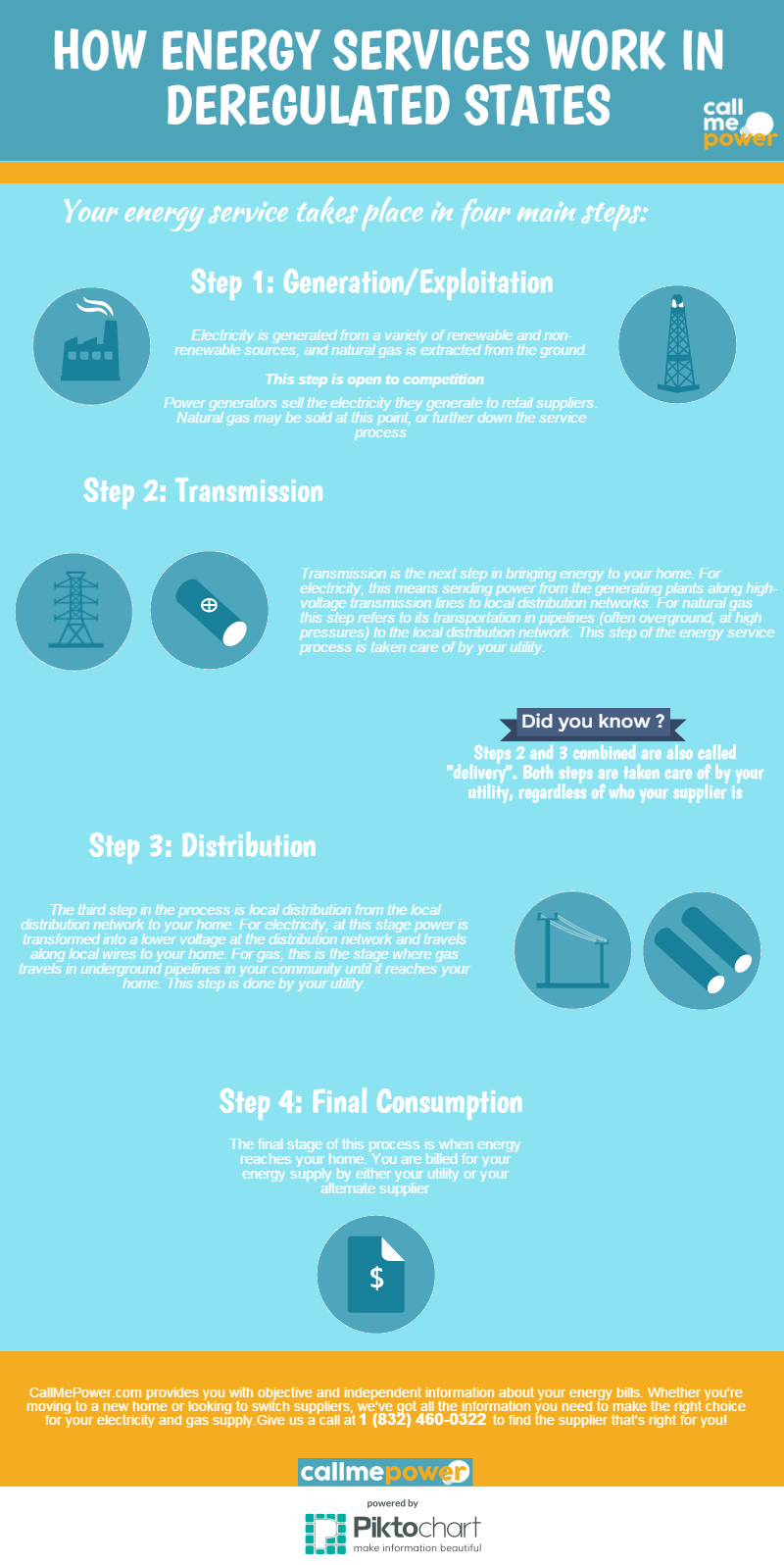 Today in many states, customers have the opportunity to choose their own retail electricity supplier, and pay their utility only for the transmission and distribution of energy. These retail suppliers have existed since the market has been open to competition, and are known as retail suppliers, alternate suppliers, or ESCOs.

The electricity and gas markets were some of the last large monopolistic markets in the US to be deregulated and liberalized. Many large industries such as telecommunications and airlines were deregulated in 1980s, and as prices and service improved, the benefits of deregulation became clear. In the 1990s, the American public and policy makers followed the trend and began to press for deregulation of the energy sector.

Need for a more efficient supply/demand

Large-scale power outages began to increase in frequency in the United States, beginning in the 1980s.

Oil prices were also increasing on a global scale since the 1970s. With oil crises like the 1973 Arab oil embargo, the cost of fuel to generate electricity increased, directly affecting retail electricity prices. In addition, electricity demand in the US doubled during the same period of time. 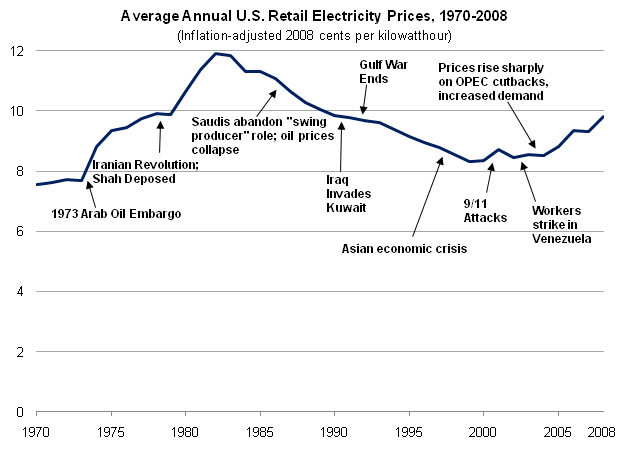 The regulated and uncompetitive structure of the industry was partly blamed for the high electricity prices. The free market is believed to reduce inefficiencies and drive down costs, and therefore prices for the end-user.

Electricity prices varied noticeably from state to state before deregulation. In states where electricity is less available and more expensive, strong lobbying has been made by large industrial consumers in order to deregulate the grid and make electricity available at lower prices.

Non-utility producers or IPPs (Independent Power Producers) are introduced in the 1980’s. These are private or institutional companies which focus on the generation of electricity, not its transmission/distribution. IPPs enable the grid to be more flexible, bringing competitive and flexible power production (such as distributed power or dispatchable plants, for example). They also tend to be smaller production sites, closer to the end user, and more adapted to a complex grid. IPPs negotiate the price and the format of the electricity produced with the utility and the retailers, which incentivises competitiveness, and brings down the price of electricity. This is another indication that deregulation is beneficial for lowering the energy prices.

The laws, and their goals

Currently there are 16 states whose electricity retail market is deregulated:

This deregulation has been put in place state by state, between the years 1999 and 2002, following a series of laws passed from bill to act in the US Congress in the past few decades, in response to the various situations which have just been described.

The early laws structuring the energy industry were, on the contrary, regulative, but they are important to point out.

Federal Power Act 1920: This law created the Federal Power Commission, whose role was to regulate the interstate activities of electric power and natural gas utilities, to maintain fair and legitimate retail prices for the consumer.

PUHCA 1935: The Public Utility Holding Company Act of 1935 limited the operations of electric utilities to a single state in order to effectively apply state law. This law was acted in order to control holding companies with cross-state activities, for example companies with assets in one state, and headquartered in another state. 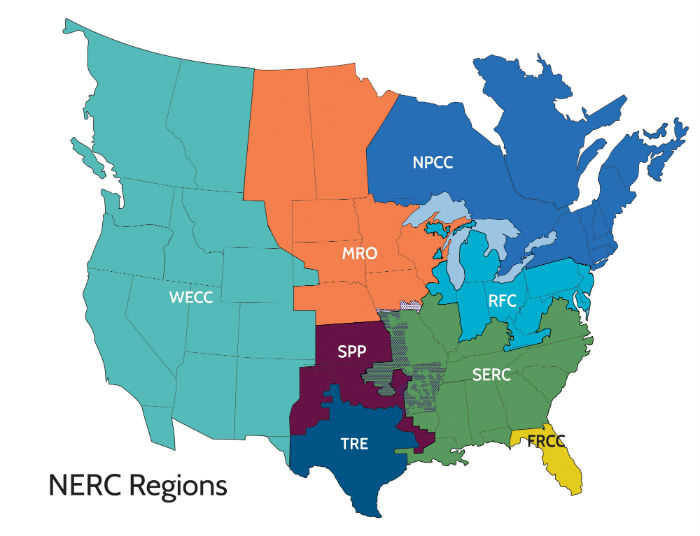 Laws after this aimed on the contrary towards more liberalisation and deregulation; for example, the Energy Policy Act of 2005, which repealed the PUHCA of 1935. Nevertheless, these first laws were fundamental in structuring the energy industry. Deregulation is possible only if a solid legislative framework previously exists, which can then be gradually amended and relaxed for the sake of competitiveness, efficiency, and autonomy.

EPCA 1975: The Energy Policy and Conservation Act of 1975 was voted “to increase domestic energy supplies and availability; to restrain energy demand; to prepare for energy emergencies; and for other purposes”. The goal of this was for the offer to remain high and the demand low, in order for the retail rates to be kept at a reasonably low level. This was in response to the 1973 Arab oil embargo which doubled the oil prices in about 1 year.

PURPA 1978: The Public Utility Regulatory Policies Act of 1978 opened wholesale markets to non-utility producers of electricity (Independent Power Producers or IPPs), and promoted energy saving and conservation (cogeneration, renewables) rather than promotional rate structures (buy more for cheaper). Jimmy Carter, president of the US in that period, made energy one of the top priorities of his mandate.

IRP 1980: Integrated Resource Planning: Despite the 1975 EPCA, the situation still remained complex, with utilities demanding retail rate increases and some utilities becoming bankrupt. In response to this, authorities became more involved in the planning of power production, ensuring the improvement of energy conservation, cogeneration, and other alternatives, rather than systematically building new plants. This process called Integrated Resource Planning (IRP) is an application of the 1975 and 1978 energy efficiency laws.

EPACT 1992: Again, this act promotes renewable energy, energy conservation, and increase the US energy independence. It also removed obstacles to wholesale power competition in the PUHCA of 1935. In consequence, non-utility power producers became exempt from certain types of corporate ownership, as well as geographic restrictions. Also, all types of electricity suppliers, not only public utilities, were now given open access to the US power transmission grid. This was a big milestone for energy market deregulation.

The US energy policies have been under the fire of criticism in the past years, mainly due to the still increasing price of electricity. The deregulation policy was seen as the solution to increasing power prices, but these continued to increase after the reforms. This is partly due to inflation, and partly due to the increase in price of natural resources, oil and gas. Nevertheless, if we take this into account, the numbers show a reduction in retail electricity prices in deregulated state as compared to whole of the US.

A probably cause for this increased uncertainty is the appearance of variable rates offered by retail suppliers. This provides the ability for end-users to follow the wholesale market price trends, but it can lead to more variation in the final price of energy. Many suppliers also offer fixed rates, which is what most consumers prefer, due to it's predictability.

The amount of customers signing up with alternate suppliers began to increase in 2009, as seen in the graph below. 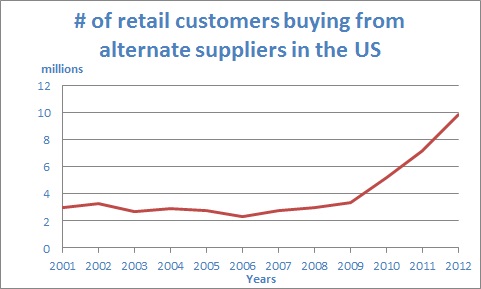 With innovations in the energy and digital industries overall, brokers, intermediary entities, and "middle-men" are disappearing to enable users to purchase goods more directly from producers and suppliers. The energy deregulation is a proof of this, and the trend will only go further in that direction.