Where Does Electricity Come From?

Electricity. We take it for granted, but where does it all come from? Here we explain different electricity sources, their advantages and disadvantages, and what it all means for you. 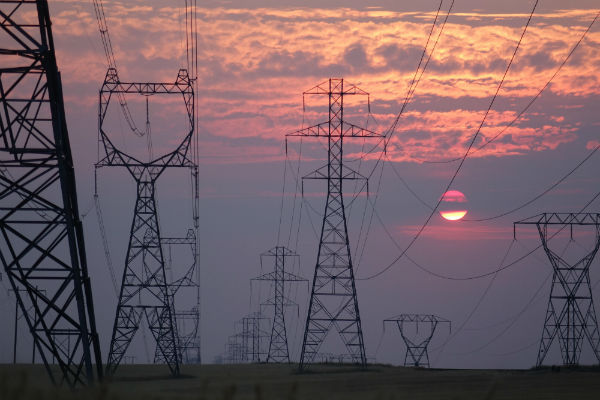 Most electricity is generated by turbines, which may be driven by water, wind, burning gas, or steam. The rotation of turbines generates mechanical energy, which then moves magnets across copper coils. This causes electrons to move, and generates an electric current.

Electricity can also be generated by photovoltaic panels, which convert light from the sun directly into electricity. Photovoltaic panels are made up of two layers that are stuck together, one that is loaded with electrons and the other that is missing some. When light hits the first layer, electrons move to the bottom layer, creating an electrical current.

Electricity can also be generated through electrochemical reaction, though it is mainly used for storage (batteries) and not as a power source.

Electricity can be generated from many sources, but each comes with its own advantages and disadvantages. With recent advancements in energy technology and with more and more states opening their electricity markets to competition, you may have a choice of what type of fuel powers your home.

Most of our power comes from non-renewable energy sources, such as natural gas, coal, or oil, with fossil fuels accounting for 67% of US electricity production.

This is the most common - and probably the most controversial - source used for generating electricity. Coal is used to generate electricity by burning it to create steam, which is then used to spin a turbine connected to an electrical generator.

Coal as a fuel source for generating electricity does have some real advantages: it's relatively inexpensive, is in abundant supply in the US, and is a reliable source of continuous power.

However, coal is increasingly unpopular because of the environmental, social and health impacts of its exploitation and utilization. With the most CO2 emitted per Btu, coal is a large contributor to global warming, along with contributing to air pollution, acid rain and health problems.

Because of some of the problems with coal, natural gas is becoming an increasingly popular source of fuel for many thermal power plants. Like coal, it is abundant in the US, relatively cheap, and emits about half as much CO2 as coal. Natural gas-fired plants are also more flexible than other steam turbines, and can be ramped up or shut down relatively easily and cheaply. However, while burning natural gas emits less CO2 than burning coal, it can emit considerable quantities of methane, another greenhouse gas that contributes to global warming.

Oil is a relatively expensive fuel source for electricity generation, and is used considerably less in the US compared to other generation fuel sources.

Nuclear energy is the only non-renewable power resource that is almost emissions free. As it runs round-the-clock, it can provide a reliable base load for electricity, and can deliver large quantities of power without taking up too much space.

However, nuclear power still relies on a finite resource (uranium), and running nuclear involves a certain amount of risk (environmental, health, terrorist, etc). As a highly centralized source of power that requires large infrastructure, nuclear may be less appropriate if utilities and communities start investing in more decentralized energy systems.

With climate change and energy security becoming increasingly important issues in electricity generation, renewable energy is growing rapidly. But no energy source is perfect, and each comes with its own set of unique challenges and possibilities.

Hydroelectric generation harnesses the movement energy of falling water to spin turbines that generate electricity. It is the most common form of renewable power sources in the US, representing 6% of total US electricity production in 2014, and is prized as a reliable, flexible and safe form of energy. Hydropower is also quite cheap, once the costs of construction have been paid off.

However, building dams can be very expensive and involve destruction of natural habitats. Dams are only appropriate in places where there is sufficient water.

Wind power harnesses the wind's kinetic energy to spin windmills that generate electricity. Like other renewable power sources, it is emissions-free, and (depending on where you live) abundant. Wind farms can also be a good source of economic development in rural areas.

However, wind is unreliable as a power source, and can't be modified to suit demand needs. Wind farms are usually located in rural areas, as some people complain about their noise and their visual impact on the environment, which can sometimes make transportation a challenge. Depending on where they are located, they can also be a hazard to birds and bats.

Solar power is a growing market in the US, but currently only represents about 0.4% of total electricity generation. It is increasingly popular as it can be installed on homes, businesses, or large buildings, and can greatly reduce electricity bills as well as being low maintenance and silent. However, the costs of installation are still currently quite high, and cost-effective/efficient storage remains a challenge.

Biomass comes from organic matter, such as garbage, wood, or crop waste. It can be used in several ways to produce energy, but usually to produce power it is burnt to produce the steam that runs turbines to produce electricity in thermal power plants. Biomass can also be used in co-generation, which takes greater advantage of the heat produced in electricity generation, making it more efficient.

Biomass has been touted as carbon neutral, though this is controversial as it can be energy-intensive to produce, which makes the net gain of carbon unclear. The overall process can also be expensive. Biomass contributed about 1.4% of total US electricity generation in 2014.

Geothermal electricity generation uses the Earth's heat to create steam that powers turbines in power generation plants. It is an almost entirely emissions-free source of power, has a tiny land footprint, is abundant and can provide consistent, reliable power. However, with the current state of technology, the best sites (where a minimum 350oF can be accessed) are often located in very remote areas, which makes transportation a challenge, and generation plants can be very expensive to build. In 2014, about 0.4% of electricity in the US came from geothermal.

What Sources of Electricity Are Used in the US? 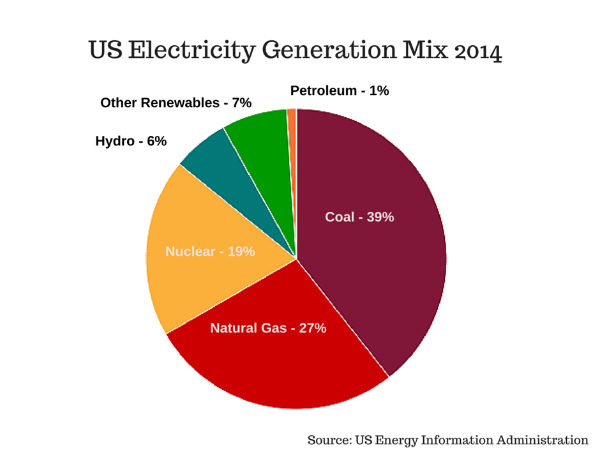 The US electricity mix is currently dominated by non-renewables, which provided 86% of the country's power. The total breakdown for 2014 was:

Fun Facts About Electricity in the US

According to the EIA, the US generated about 4,093 billion kilowatt-hours of electricity in 2014.

Electricity was first sold in the US in 1979, by the California Electric Light Company

The average US household consumes about about 900 kWh per month