If you are looking into purchasing a green energy contract, you will likely come accross the word "REC" (Renewable Energy Certificates). But what are they, and how do they support green energy? Find out everything you need to know about REC and how they work.

What are Renewable Energy Certificates?

Renewable Energy Certificates (REC) are non-tangible energy commodities that represent the property rights to the environmental, social and other nonpower qualities of green (renewable) electricity generation, measured in units of one (1) Megawatt-hour. In other words, a REC represents the proof of one MWh of renewably-generated electricity. A REC (and its associated environmental benefits) can be sold separately from the physical electricity that it came from.

How Do REC Work? 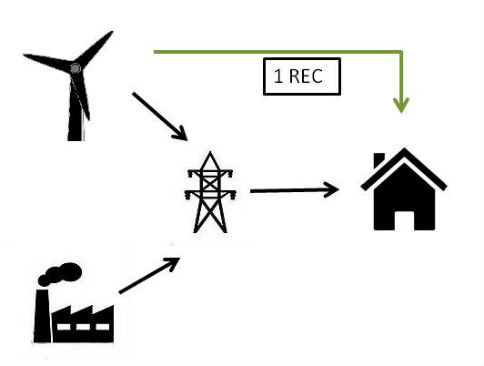 Certification is an important aspect of the REC system. In order for it to be allowed to generate and sell REC, a renewable energy generation facility must be certified by a regulatory authority, ensuring that its electricity generation meets certain standards. The REC themselves are most often certified and tracked by a third party as well.

Purchasing a REC is not quite the same as purchasing the renewable energy itself. In fact, unless you are able to generate your own electricity, it is impossible to determine the precise source(s) of the electricity you use, as once electricity enters the grid it becomes indistinguishable. Furthermore, as REC are not necessarily tied to a particular geography, the REC that you purchase (or that are purchased and retired on your behalf by your green energy supplier) may not necessarily connected to the same electricity grid as the one into which the associated physical electricity was injected. However, by purchasing an REC, an electricity user can claim to have offset their carbon emissions.

Are All REC Equal?

All renewable energy certificates are not the same and in fact certificates provide information about the associated electricity, including:

Renewable energy certificates can range in price, depending on the location and type of renewable resource, with a "national renewable blend" product at the lowest cost, and REC associated with a specific technology or region gaining higher prices.

What to Look for in a Green Energy Contract

As REC are not bound by geography, you may also want to consider choosing a contract that allows you to purchase REC that are locally produced. While MWh of energy does not change in value if it was produced 10 km or 1000 km from your home, supporting locally-produced green energy can help to increase green energy generation capacity in your area, and contribute towards it gaining a larger share of your state's energy mix.

Finally, don't forget to check out the usual features of the terms and conditions of the contract to make sure that you choose a green energy plan that is right for you.

Find out more about green energy!
Is Green Energy Worth It?
What is Community Solar?