Watts, kilowatts, kilowatt hours, amperes, volts, kilovolts... It can all get a little confusing, so let us help you understand a little more about how the electricity you use is measured.

We bet that when you think of watts, you probably think of lightbulbs! Watts and kilowatts (kW) are both units of measurement for electricity, and are used to talk about how much electricity a system consumes (or produces). In the case of lightbulbs, knowing how many watts are consumed also tells you how bright the light emitted will be. A kilowatt is equal to 1000 watts.

For example, an average microwave consumes approximately 1000 watts, or 1kW. A TV, on the other hand, uses a lot less--around 150 watts. And a modern CFL lightbulb, even less still, like 15 watts.

Ok, so you've got watts and kilowatts down, but what the heck is a kVA? The kVA (kilovolt-ampere) is just another measure of power. 1 kVA equals 1000 VA, and depending on whether you are in AC (alternating current) or DC (direct current), 1 kVA will more or less be equal to 1kW. 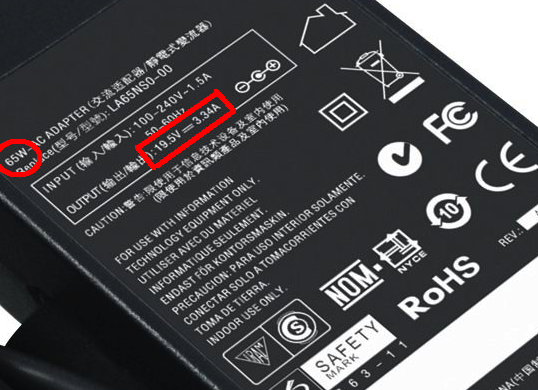 Here, in the output (in the wire going out of the charger towards the laptop computer), the Voltage is 19.5V, and the Amperage is 3.34A.

The power required by the computer is 65W. This charger will deliver 65W in DC current (Direct Current) to the computer. This is described in the red circle, and also in the bottom rectangle, which describes the output (the electricity going out of the charger and into the computer). The input (electricity coming from the plug) is a little bit more complicated, because it is in AC current (Alternating Current). This one is shown as being:

This is an approximation, for a Power Factor of 40% is rather low for a computer charger, but it is a way for you to calculate your appliance's power in Watts from information in Amperes and Volts.

What is a Kilowatt-Hour?

This is the part that matters the most for understanding your electric bill. When you buy electricity, your energy provider charges you by the kilowatt-hour (kWh). Basically, this is short for "one kilowatt during one hour."

When you use a 1 kilowatt appliance for 1 hour, you have consumed one kilowatt-hour of electricity. Consumption is usually marked on your appliance in watts, so you may have to do some calculation.

If you use a 15 kilowatt central air system for 2 hours, your consumption amounts to:

Read more about average electricity consumption and the price of electricity per kilowatt-hour.