The Price of Electricity per kWh

Most of us tend to only look at the bottom line when we pay our electricity bills. But a lot goes into that final number, which is why it can change so dramatically from month to month. Understanding how electricity pricing works is the first step in taking charge of your energy bills. Here we explain everything you need to know about the price of your electricity, and what you can do to keep it as low as possible.

GOT A SPECIFIC QUESTION ABOUT YOUR BILL?Call us at 1 (832) 460-0233 to learn more about the best electricity rates available in your area

What Are Prices Made Up Of

There are four main costs that go into the final price on your electricity bill:

Find out moreLearn more about kWh and other measurements of electricity in more detail.

How much energy do my appliances use?

How much electricity your appliances use depends on how powerful they are (which is measured in Watts), as well as their energy efficiency.

How Much Does Electricity Cost In The United States? 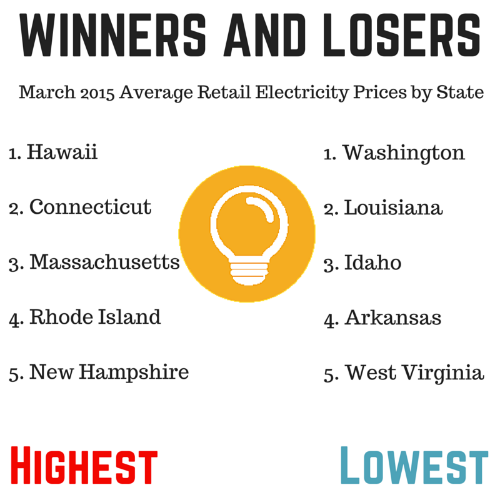 The average cost of retail electricity in the US is about 9.84 ¢/kWh, but this varies considerably by state. For example, Washington and Louisiana enjoys some of the lowest electricity rates in the country, at an average of about 9 ¢/kWh in March 2015, whereas in Hawaii the average price of electricity was 30.54 ¢/kWh

Why such a wide variation in prices? As you recall, there are four main factors that make up the price of electricity: how much you use, the rate you pay for supply, delivery charges, and state charges/taxes. Out of these, the cost of electricity supply and the costs of delivery generally play the biggest role in explaining how expensive electricity is (or isn't) in your state.

From wind, the sun, coal, natural gas, nuclear, or hydro, electricity can be generated from a variety of sources, but each type of electricity comes with a different price tag. Most states use a variety of generation sources for their electricity supply, but the exact proportion depends on what is most available locally. States like Washington are lucky enough to be able to take advantage of hydroelectricity, which is relatively cheap (once it has been built). Other states, such as Hawaii, do not have access to abundant and cheap sources of power, and have to rely on more expensive power sources, such as imported electricity (Hawaii imports over 90% of its electricity, mostly from oil-fired power plants).

Another important factor in determining the overall price of your electricity is the cost of maintaining the infrastructure that brings electricity to your home. These are mostly fixed costs, that are based more on the size of the service territory and less on the number of people within it. This means that it helps to live in a relatively small area with a high population density, so that the costs can be spread out over more people. In general, people living in cities pay lower delivery costs than people living in rural areas.

Why Electricity Prices Are So Volatile

Electricity prices can change depending on the season, the weather, or even the time of day. Most power is generated, sold and delivered in real time, i.e. as it's needed. This means that any change in demand or supply can have an impact on price. With the way the majority of our electricity system is structured, power supply is fairly stable (except for unexpected situations, such as a power plant suddenly malfunctioning). Changes in demand, however, can have a strong impact on the price of electricity.

Think about it. When do you use electricity? Most people tend to use the most electricity during the day, especially in the mornings and in the evenings, before and after work. In fact, chances are the majority of the power that you use in a day is during these times. On the other hand, you probably use very little electricity at night when you're asleep. Most of us tend to follow the same patterns of when we use power. This means that during certain times of the day (known as periods of peak demand), demand for electricity is much higher than others. As electricity is traded in real time, this means that the price of electricity during peak times can be quite expensive compared to other times in the day.

While electricity prices can change depending on the region and the time of year, one thing's for certain: the average price of electricity per kilowatt-hour is steadily increasing each and every year..